Join the Global Alliance for Seed Freedom in a Fortnight of Action from the 2-16 October 2012.

Global Alliance for Seed Freedom and the Fortnight of Action - 2-16 October 2012
Many of us have created contemporary movements to respond to the seed emergency. The global campaign on Seed Freedom intends to give strength to these existing movements. It aims to ‘connect the dots’ of the many voices around the globe to add strength to the movement to keep seed free.
From 2nd October (Gandhi’s Birth Anniversary), to 16th October (World Food Day) we are planning intensive actions to create a global citizens’ response on the issue of Seed Freedom that we hope will act as a wake up call for citizens and governments. Gandhi had said, “as long as the superstition that unjust laws must be obeyed exist, so will slavery exist”. Humanity and diverse species on the Earth are being pushed into a new form of seed slavery. In the spirit of Gandhi, we therefore call for a civil disobedience against unjust laws. Below, we outline a number of ideas for actions that we emphasize are only a starting point. We look forward to planning common strategies and actions together as the campaign for Seed Freedom becomes stronger and louder.
Two documents that provide an in-depth understanding of the seed issue are:

2. The GMO Emperor has no Clothes: false promises, failed technologies 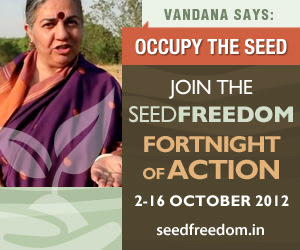 Declaration on Seed Freedom - by Dr. Vandana Shiva
1. Seed is the source of life, it is the self urge of life to express itself, to renew itself, to multiply, to evolve in perpetuity in freedom.

2. Seed is the embodiment of bio cultural diversity. It contains millions of years of biological and cultural evolution of the past, and the potential of millennia of a future unfolding.

3. Seed Freedom is the birth right of every form of life and is the basis for the protection of biodiversity.
4. Seed Freedom is the birth right of every farmer and food producer. Farmers rights to save, exchange, evolve, breed, sell seed is at the heart of Seed Freedom. When this freedom is taken away farmers get trapped in debt and in extreme cases commit suicide.
5. Seed Freedom is the basis of Food Freedom, since seed is the first link in the food chain.
6. Seed Freedom is threatened by patents on seed, which create seed monopolies and make it illegal for farmers to save and exchange seed. Patents on seed are ethically and ecologically unjustified because patents are exclusive rights granted for an invention. Seed is not an invention. Life is not an invention.
7. Seed Freedom of diverse cultures is threatened by Biopiracy and the patenting of indigenous knowledge and biodiversity. Biopiracy is not innovation – it is theft.
8. Seed Freedom is threatened by genetically engineered seeds, which are contaminating our farms, thus closing the option for GMO-free food for all. Seed Freedom of farmers is threatened when after contaminating our crops, corporations sue farmer for “stealing their property”.
9. Seed Freedom is threatened by the deliberate transformation of the seed from a renewable self generative resource to a non renewable patented commodity. The most extreme case of non renewable seed is the “Terminator Technology” developed with aim to create sterile seed.
10. We commit ourselves to defending seed freedom as the freedom of diverse species to evolve; as the freedom of human communities to reclaim open source seed as a commons.
To this end, we will save seed.
We will create community seed banks and seed libraries.
We will not recognize any law that illegitimately makes seed the private property of corporations. We will stop the patents on seed 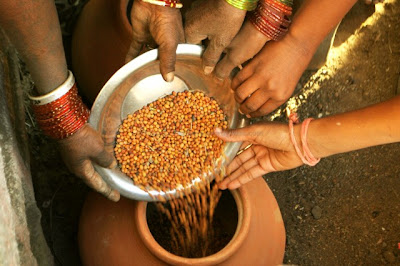 - Join the Global Alliance for Seed Freedom - sign the Declaration on Seed Freedom: http://seedfreedom.in/declaration/ (English - other languages to follow).

- Start a seed bank - save your own non GMO/patented seeds:
http://seedfreedom.in/act/seedbank/

- Declare a Seed Freedom Zone within your home, institution, village or municipality, which does not recognise patent on seed:
http://seedfreedom.in/wp-content/uploads/2012/06/Seed-Kit.pd

- Organise a screening of the Seeds of Freedom film: http://seedsoffreedom.info/support-us/hold-a-screening/ (English, French, Spanish, Portuguese only, looking for other translations and translators)

- HOLD A SCREENING FOR THE SEED FREEDOM FORTNIGHT, 2-16 OCTOBER 2012: http://seedsoffreedom.info/take-action/hold-a-screening/ and add this as an event to our Fortnight calendar: http://seedfreedom.in/events/community/add

A landmark film from The Gaia Foundation and the African Biodiversity Network, narrated by Jeremy Irons. Find out more at http://seedsoffreedom.info/.

The story of seed has become one of loss, control, dependence and debt.
It's been written by those who want to make vast profit from our food system, no matter what the true cost. It's time to change the story.

Produced by The Gaia Foundation and the African Biodiversity Network, in collaboration with MELCA Ethiopia, Navdanya International and GRAIN.

- Organise a dinner, lunch or picnic with your family, friends, community or institution sourcing ingredients from farmers who are saving and using organic seeds (non GMO/patented) creating awareness and understanding on the links between seed, food and health.

- Organise a workshop/conference, rally, march or gathering at offices of seed multinationals, patent offices and local government bodies, to create awareness about the links between Seed Freedom and food freedom.

- Write letters and submit petitions to local institutions, local communities and local municipalities to make them aware of the importance of Seed Freedom for the future of their people and their environment. Get their support to declare "Seed Freedom Zones".

- Write to WTO insisting the completion of the mandatory review of the TRIPS article 27.3b which forces patents on life forms. Ask them to revoke Intellectual Property Rights on seeds

- Write to President Obama insisting he stop using the White House to bully countries on behalf of Monsanto, destroying their seed sovereignty through GMOs and patents